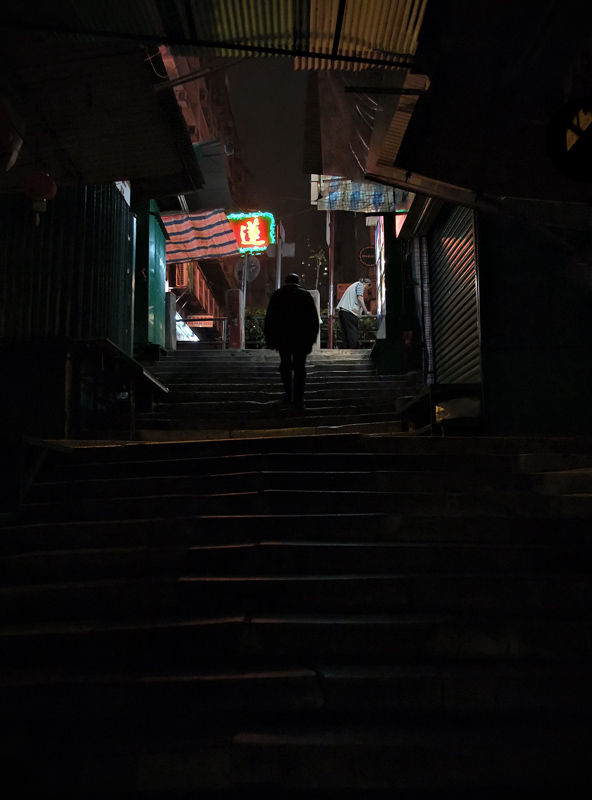 PS. Aberdeen Street is one of the earliest streets after the "colony of Hong Kong" was founded; it's named after George Hamilton-Gordon, 4th Earl of Aberdeen (Wikipedia: a Scottish politician, successively a Tory, Conservative and Peelite, who served as Prime Minister of the United Kingdom from 1852 until 1855).

I really enjoy the feel and look of this image.

Fabulous Hugo. I love how the light just kisses the steps. Amazing work.

When you are at your best! best...jerry

Very strong image, the subtlety of the foreground sets this up so well.

So dramatic and loaded!

Great, Hugo. I'm glad to be back to see your pictures.
Thanks for your comments of the last days.

Love that dark scene out of which the character is succeeded to fly out ! Why "Lotus" ? Could you explain me your title, i'm not sure I understood. Have a sweet sunday*

@k@: Oh k@, "Lotus" is the meaning of that Chinese character - name of the tea House!:-) Have a sweeeet sunday too!

That is the kind of shot that I love. Dark. Mysterious.

You re really good in catching atmosphere, I love this one very much

Prefer this image Hugo, very atmospheric, like a light at the end of a tunnel

Superb shot, wonderful composition, and I like how there is just tiny traces of light on the steps

I love this composition and your work about lighting ! dark on the stairs and light above, where the life is. great mood !

One of the best photo's I've seen in a while! Excellent framing, lighting and timing. The F200 really does shine in your hands Hugo. Well done.

@IanSmith: How gratifying that this appeals to you too! I'm pleased that I was patient enough to wait for this man to appear and decisive enough to take the shot!:-) Have a great week my friend!

It's just lovely to see this unpretentious shot, the bright lights give a welcoming glow.

Do they serve the tea in a ceremony as in Japan ?

Interesting how the eye is pulled up, then down. Mysterious.

wow! wow! wow!
Five stars from me...this is amazing Hugo. Love the way the light illuminates the edge of every step. So filled with emotion and a touch of mystery.

I really love this one Hugo...bravo...the man heading up into the night lit by stores and signs in the distance is just perfect...the perspective is beautiful...and the gentle touches of light and detail coming all the way down back at the viewer is also just lovely and beautiful...the cropping/frame is impeccable too...excellent Hugo...