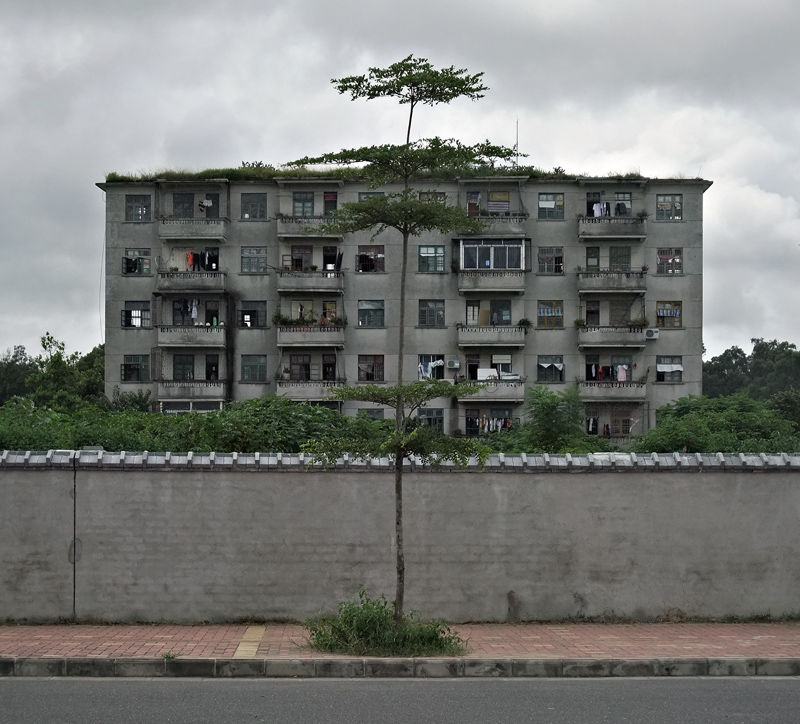 While I was still being carried away by the amazing vastness and magnificence of the harbour (Beibuwan or Beibu Gulf, that I tried to capture in the previous pics), I turned around to join my team but only found myself to be held up by just another sight. I was captivated, not by something spectacular, but by the mood of a not-too-old, ordinary-looking yet lonely house in which some ordinary local people were residing.

Almost all the neighbouring buildings were already bulldozed to make way for new developments; I knew very well that not too soon in the future this house would also be be replaced by a luxury hotel or an expensive resort home (for some wealthy people from outside)... So, the moment I took one last shot of this house, perhaps I was also saying farewell to Behai's existing way of living.

(PS. Beihai is a beautiful coastal city south of China, that is in a progress of "modernization" at an incredible pace and receiving huge financial support from the government.)

From my recent trip to Guangxi.

looks symmetric with the tree in the center.

Just love (beyond your sensitive lines in the caption) the way this oh-so fragile young tree seems to hold the building over his frail shoulders... as if saying, i'm new, i'm young, but in won't forget the decaying past promised to destruction & vanishing, i promised... I love the balance here, how this frail buddy is placed right in the middle and how the green grows even on top of the apartments, a little jungle slowly swallowing the gray (and what a deep meaningful gray tone here...). Wonderful compo for a deep message, touches me a lot !

@k@: Somehow reading your beautifully touching words makes me like the image even more!:-) Thanks again for reading into the pic!!!

The lone tree heightens the quality and mood of this picture so well...a superbly seen and made image Hugo:)

Can this thin tree protect the building and the inhabitants ? Against modernization, "urbanism" (?) is he sufficiently strong ?

A lot of green around, I hope it will be for long...

Another memory. You have captured many, Hugo. Lets hope the residents get something new that they enjoy.

The composition is just fine !!!! Bravo.

It sounds as though this will soon be a place of uprooted households and lives. I guess that's the unfortunate hidden cost of modernization everywhere. This is a lovely farewell shot.

Behai ? I Know only Behai Park in Beijing, a beautiful place of the past of China, around there some old buildings and traditionals hutong in contrast with new modern and luxury buildings, hotels and temple of shopping commercial ! it was around 2003 and all runs and grows so fast in China now ! I love your sensitive look on this old part of this town, for a while, still the same ! Love your frame with symetry and this fragile tree in the middle as a symbolism of two worlds !

Excellent shot! Love your composition...
The tree in the foreground adds to the effect...

Punit from Somewhere in, India

The single lean tree in the center does seem to be trying to shoulder the old building. Very nice composition.

Nicely composed but a sad feeling here, i find... all this grey...

A terrific shot. I love the symmetry - it's perfect with the tree in the middle.

I think K@ summed it up beautifully. I love the photo Hugo.

The price of rapid development?!

I think is a great idea to capture a house that soon, probabliy, will not be there. I like the composition with the house and the tree. great work!

I like your words here, and the composition of the photo is fantastic and meaningful with this central tree :)

This is a stunning shot. In its simple perfection and beautiful restraint. I love the building beyond and your placement of the tree.

So that tree was planted there just for your photograph? Wonderful vision. Hugo, you are witnessing some amazing times in China. A country with such long standing culture changing at this unbelievable rate. I used to marvel at the changes my Grandmother witnessed in her lifetime - horse drawn carriages replaced by cars, telecommunications and television becoming common place - the main factor being disposable income. The increase in the UK over the last 40 years has been staggering. But wow, that must be nothing compared to what is happening hour on hour in China.

Interesting, both the story and the picture. Although the threatening situation for this house and its inhabitants there seems to be some positive about it. wonderful compostion, the symmetri, and clors, the grey, that really underlines your story.

A magnificent composition and a heartfelt document.